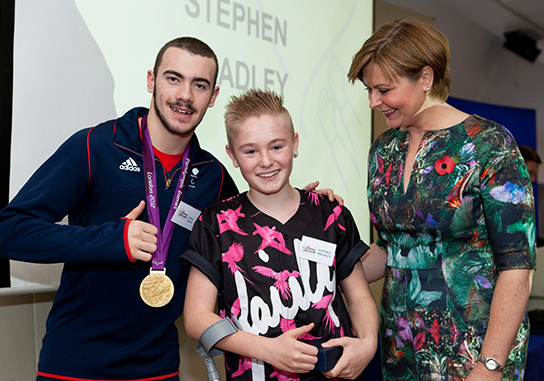 Meet the inspirational kids who have faced more in their young years than most adults do in a lifetime.

And, even though they are fighting life-threatening illnesses, they continue to smile through their adversity.

Now they have earned themselves deserving Bravehearts awards at a ceremony at St James’ Park in Newcastle.

And the annual event saw these courageous children receive the recognition they so richly deserve.

This year 23 children from across the North East and Cumbria took great pride in receiving a Bravehearts crystal plinth and a gift of their choice, in recognition of the courage and strength they have shown in battling illness.

Arriving in a line of limousines, each young Braveheart has a humbling story to tell.

They have their own personal battle and find their own particular way of coping.
Their efforts, and the spirit with which they deal with their situations, are admired to those around them.

The ceremony was hosted by charity trustee Chris Metcalfe and the 23 awards were presented by BBC Look North Presenter Carol Malia and Newcastle United legend and former captain Bobby Moncur .

Leukaemia sufferer Annabelle Pattie, from Bedlington, Northumberland, is nine years old and has spent her life in and out of hospital, and has had to learn how to walk again.

But her courage and determination to succeed won her a Bravehearts award.

And the ceremony proved to be a milestone for her when she ditched her wheelchair for the first time and walked onto the stage to collect her prize.
“I’m proud I can walk on stage, I get tired but I am determined to do it,” said Annabelle.

Dad Wayne, 49, said: “She has been in a wheelchair since Easter last year when she was in intensive care. She relies on her wheelchair, she goes to school in it, but she was determined not to bring her wheelchair with her today. She wanted to walk on stage.”

In presenting Annabelle with her award, Chris said: “Annabelle was diagnosed with acute lymphoblastic leukaemia aged four and underwent two-and-a-half years of treatment before a relapse in 2017. Her treatments included a three-week stay in intensive care due to the development of sepsis.

“Annabelle has been having treatment for over half of her life and still has another 18 months ahead of her, but despite this she has maintained a really positive outlook taking on all the challenges of her condition with real grace, dignity and determination.

“This determination has been demonstrated by her great efforts in learning to walk again. It is a great pleasure to present her with a very well-deserved award.”

Nine-year-old Hope Walton, of Hebburn, South Tyneside, certainly doesn’t let her condition get in the way and has proved she is an inspiration to those around her.
Even with only half a working heart, she’s a star on her football team.

In presenting Hope with the award Chris said: “Hope was born with a complex heart condition as well as a defective spleen. This has meant she has undergone three open heart operations and requires daily medication.

“Despite being left with a weaker heart than is normal, Hope displays fantastic resilience with a determination to live life to the full. She now plays football for the Felling Magpies Girls Team, recently playing for the under 11s despite being just nine years old.
“For Hope ‘age is just a number’ and she is quite happy to play with older girls on a bigger pitch. I am told that she never gives up and constantly inspires her family and friends.”

Cancer sufferer Ruby Hall, from Ashington, Northumberland, is a twin and gets frustrated not being able to do the same things as her sister.
But she has been given the award for her determination and continuous smiles as she goes through her treatment.

Chris said: “Ruby has been undergoing intensive treatment for acute myeloid leukaemia which causes her chronic fatigue and difficulty with her mobility.

“Her biggest frustrations have been not being able to keep up with her friends and her twin sister and missing out on school when in hospital.
“Ruby has been amazingly positive throughout her treatment and always tries her best to get on with her day to day life.

“She is always smiling even at the time she lost her hair and looked so different from her sister and her friends. Her determination, positive attitude and courage have been fantastic.”

Credit to The Chronicle. Read the full story here.

Brave Hearts of the North East received an unexpected invitation to a donation event.
>